Talk about the life consuming, celibacy inducing hobby that is all the rage these days.
Post Reply
3937 posts

Bobito wrote: ↑
Sun Jan 19, 2020 3:00 pm
00 Qan[T] is as broken as the Turn A in these games, but I don't remember that difference in the upgrades to get another ability of better stats, as least not from what I recall from the last psp game. Seems like I'l have to wait until my laptop definitely dies.

The upgrade is called the 00 Qan [T] Full Saber, and it replaces the Quantum Burst repair "attack" with higher numbers everywhere else. Dunno where that unit had its SD Gundam debut.
Autism attracts more autism. Sooner or later, an internet nobody will attract the exact kind of fans - and detractors - he deserves.
-Yours Truly

Why can't I use Sonic as a demon in SMT.
Top

You're too slow.
Slam the child on the hard concrete!
Top

It's just no use.
Autism attracts more autism. Sooner or later, an internet nobody will attract the exact kind of fans - and detractors - he deserves.
-Yours Truly

I beat Mem Aleph but she was complete horseshit. I had like 10 level 70-80 overpowered demons of all alignments. Maybe you don't realize how bullshit Mem Aleph is. Let me sperge for a bit: 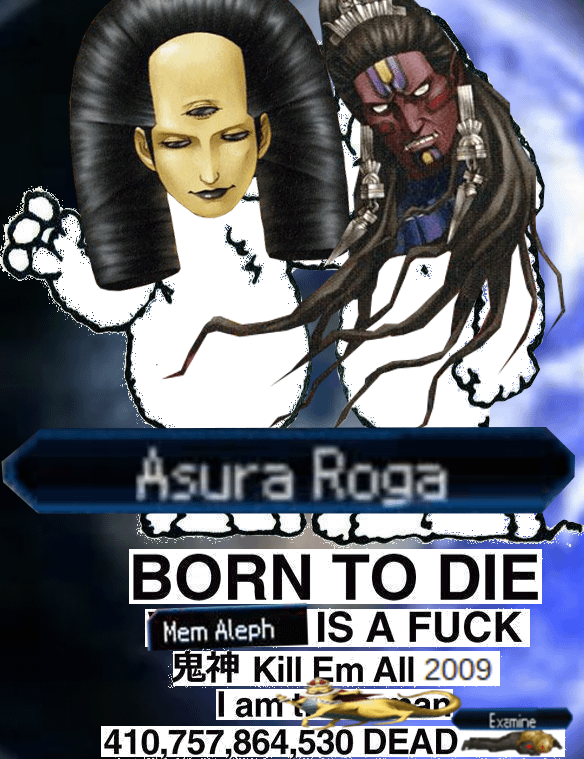 Mem Aleph absolutely reads your inputs and reacts on the same turn. If you use Makarakarn (magic reflect), she will use an Almighty spell or target her instant-death attack on your main character. The accuracy of the instant death skill is high.

Mem Aleph loves to spam instant-death spells that hit all party members. These are either expel or curse element. If a demon you have on-screen does not null BOTH elements, it will not stay on-screen for long.

She has spells of all elements. Simply called "Ice," or "Fire," they are the highest-damage versions of those elements and hit all party members. There is no armor in the game that reflects or nulls all elements. She can also deal physical damage with a multi-hitting move that strikes everyone in your party. So if you or a demon are weak or take normal damage from physical attacks, expect to take 300-700 damage per party member. Even if you resist physical, you will take a good amount.

That's a constant in the entire fight: resistance just lowers the damage numbers a bit. You can't rely on resistance.

Mem Aleph primarily targets the main character. Well, she hits the entire party but he takes most of the damage because there is no good resist-all armor. That's when she isn't hitting him with instant death. So he dies a lot. When he dies, you are unable to summon any demons unless you have demons with special skills. You are unable to revive anyone unless a demon has recarm or samerecarm. My main character spent most of the fight dead as I scrambled to get him back up. Superdemons like Xi Wangmu, Isis and Maria were lifesavers, but couldn't stay up for long against Mem Aleph. The only demon who could stay up against her for long periods of time was Shenlong, because he resists everything and is OP as fuck. But he didn't have revival or summon skills.

She also has a skill that hits all party members with a random status ailment. Most status ailments are pretty fucking horrible, but the worst is Stone. Stoned characters are fucking dead, but they can't be revived with revival skills and they take up a slot that would otherwise be free. You must cure them with either a dis-stone or status-curing skill. Most demons don't have that skill, so if the main character is dead, you can get fucked. You can sabbatma or Invitation that demon out (skills that allow you to summon a new demon) but that demon will probably stay dead.

This is all for the first phase of Mem Aleph, btw. This is phase 1. If you get past this phase, which you may not, she goes into a second phase. In this phase, she rotates what damage type she resists and which she reflects. You have to check every turn to see if a damage type you were using against her is now reflected by her. If she reflects your damage, the attacking character will almost certainly die. She also gains new attacks. I don't remember what they all are. I think one is a new type of almighty damage.

The most bullshit thing about the 2nd phase is just that she gets a new health bar. It's very slow to deplete her health in both phases and she's going to be dealing insane damage throughout. I would have never made it past phase 1 if not for Shenlong spamming Trisagion (high damage fire spell) every single turn. I also had to burn most of my mp recovery items saved across the entire game, because Invitation, Samerecarm, Mediarahan and Salvation are all extremely expensive spells you NEED to spam. The best way to not die against Mem Aleph was for me to spam Salvation every single fucking turn and it was usually needed because of her high damage.

All in all, I completely understand why many consider Mem Aleph to be the flat-out hardest boss in an SMT game. Hell, Trumpeter spamming megidoloan as a random encounter in Horologius was already probably tougher than most SMT bosses.

Oh and I've heard some faggots say that she's easy if you use Vishnu/Krishna or some other level 95 demons. Well, no fucking shit. But you're going to be about level 77 when you reach her, and you'll be at the end of the game. Even with the new Womb of Grief dungeon, I was not at level 80 after finishing all floors.

Imagine farming 15 more levels at the very end of the game, just so you can go online and tell people they're wrong and Mem Aleph is easy. That has to be at least 3 hours of just farming. At least. It took me probably an hour to farm from 77 to 80 so that I could get Shenlong and a few other guys I needed. I had White Album on btw (increases xp.)

Sounds like fun stuff to look forward to.
Autism attracts more autism. Sooner or later, an internet nobody will attract the exact kind of fans - and detractors - he deserves.
-Yours Truly

Video games aren't about having fun.

I learned my lesson while trying to farm for the Enchanter's Trident in Dark Souls.
Top
Post Reply
3937 posts