SpoilerShow
How did you know it was a Lenovo?
Top

I think I black-pilled someone and broke them.

This was a person that used to dismiss everything I said. They voted for the Democrat party including Hillary.

Then when the St. Floyd of Fentanyl riots happened, they got redpilled at 480mph, realizing I was right about everything. They suddenly started posting redpilled stuff on social media.

But now this person has developed severe mental health issues. I think it's due to constantly hearing about BLM, Antifa, and President Mushbrain and his goons. In retrospect, I kind of wish they had stayed bluepilled. Because the black pill is such a dangerous thing.
お前はもう死んでいる。
Top

It's one thing to take a red or black pill. But it's another to overcome it. Sometimes the super bluepilled types have a tendency to go way too far the other direction before they correct course.

It's no different from being a christian, discovering some flaws in christianity and going hardcore FUCK YOU GOD, FUCK YOU DAD!!!! REEEEEEEE!!!! A lot of casual feminists became hardcore antifeminist sperges around the time of gamergate. Or vice-versa.

Yeah, I personally have disconnected from all news sites and stations. I don't even read the politics threads here anymore.

But sometimes I accidentally stumble across something that terrifies me, like mushbrain attempting to (illegally) add additional handpicked supreme court judges to the bench.
お前はもう死んでいる。
Top

WIsh I could mentally break some acquaintances I have with the black pill. They are a bunch of useless, unemployable sacks of shit who are dreaming about the (at this point inevitable) return of the Left to power so they can get some meager gibs from the government to keep on living their current lifestyle of playing Dota 2 and Magic the Gathering all day, every day, forever (they're currently limited on doing this until their parents die and/or stop footing their billth). Because I'm pretty sure that when the Socialists get absolute power, these parasitic pieces of shit will get a bullet to the head instead. They are useless to the revolution and don't produce nothing that socialists can steal.
Top

Tell him it's going to be a White Boy Summer! That ought to revive the good spirits.
SpoilerShow 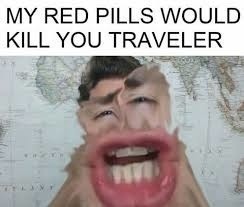 Should have took the green and purple pill.
Top

Is there a "moderate" pill that just gives people some Goddamn self-control and common sense?

Basically something in-between "Trump Is My Lord And Savior" and "Cut The Balls Off A Newborn Boy If It Looks At Something Pink, Because Its Probably A Tranny"?

Because we're constantly dipping into the deep end of either political pool and its getting harder and harder to swim with some of these retards.
Top

Autism gets the most attention on social media, plus each and every instance of drama is trying to force you to pick one extremist side in the "If you're not with me, you are against me" sense.
Autism attracts more autism. Sooner or later, an internet nobody will attract the exact kind of fans - and detractors - he deserves.
-Yours Truly