I remember that one. Another that stuck in my mind was the one about lawn, weirdly enough.
SpoilerShow

One I remember is when they proved that artisanal water wasnt real by pissing in a cup and serving it at a restaurant.
I wish I could remember what they meant by that.

Meh. Half waste. The seasons are shorter than BB seasons, 10 episodes, yet it feels like some of these season stories could have been told in 6 or 7. I didn't need an entire episode of Mike and Jimmy in the desert. And I like Mike.

veris leta facies wrote: ↑
Wed Apr 22, 2020 12:48 pm
Better Call Saul season 5 was excellent, easily my favourite season of the show. Episodes 6-10 were up to par with Breaking Bad at its finest. The only thing I didn't get was Kim's and Jimmy's sudden fascination of destroying Howards career. Who gives a fuck about Howard and what has he even done to deserve this? Plus, doesn't these two have more pressing matters at hand atm?

But anyway, top-notch! Can't wait for the final season.

Episode 10 was a bit disappointing to me - the previous season finales all left with some major game-changer(although season 1's basically got retconned). With season 5, it feels like there should be another episode after this that's the proper season finale.

I'm also not sure about Kim basically becoming another Saul Goodman(hates the high and mighty lawyers, pulls scams), especially after all the griping she's done in the previous seasons. I will say I thought their relationship was much more likable this season than any before. Rhea Seehorn's one of the best female leads out there right now.

"Bagman" was the best TV episode this year. Not even a contest.

Howard and Nacho are such strange characters to me in that they seem to have very little to do with anything. Howard used to, but ever since Chuck died, he's basically been a reoccurring cameo every other episode. "Jimmy, have you thought about mah job offer?"

And Nacho has always been some random Salamanca thug whose only motivations have ever been saving his dad and earning respect. That's all we know about this guy five seasons in.


Meh. I like Something Unforgivable and Bad Choice Road more.

I don't get why they're trying to destroy Howard either. I mean the guy is a little bit of a douche, you can never quite tell if he's for or against Jimmy. The hookers and the bowling ball should have been saved from the head banker asshole. FUCK I hated that guy. I wanted Lalo to kill him the most.

Speaking Lalo, Gus, you called down the thunder and now you got it. Season 6 is going to be a bloodbath. And Jimmy is going to attempt an Eviel Kenievel type negotiation tactic only for it to crash and burn at Mike's expense.

Otherwise this scene makes no sense:

Then again, maybe Vince Gilligan was like a less autistic George Lucas and didn't think Saul and Mike would ever become partners in a prequel.

ebin namefag wrote: ↑
Sat Mar 26, 2022 11:29 pm
One I remember is when they proved that artisanal water wasnt real by pissing in a cup and serving it at a restaurant.
I wish I could remember what they meant by that.

If it's the Bottled Water episode you're talking about, they used water from a hose and served it to gullible patrons in bottles with fancy sounding names.

I need to watch P&T Bullshit again sometime. It's been too long.
Top

Pope Corky III wrote: ↑
Thu Apr 07, 2022 3:35 am
Then again, maybe Vince Gilligan was like a less autistic George Lucas and didn't think Saul and Mike would ever become partners in a prequel.

Mike was originally introduced as Saul's private investigator in Breaking Bad, before being retconned to be Gus's right hand man. Sometimes I feel like that's the only reason he and Saul work together in BCS. It's an obligatory thing to make the timeline work since they otherwise have nothing in common. 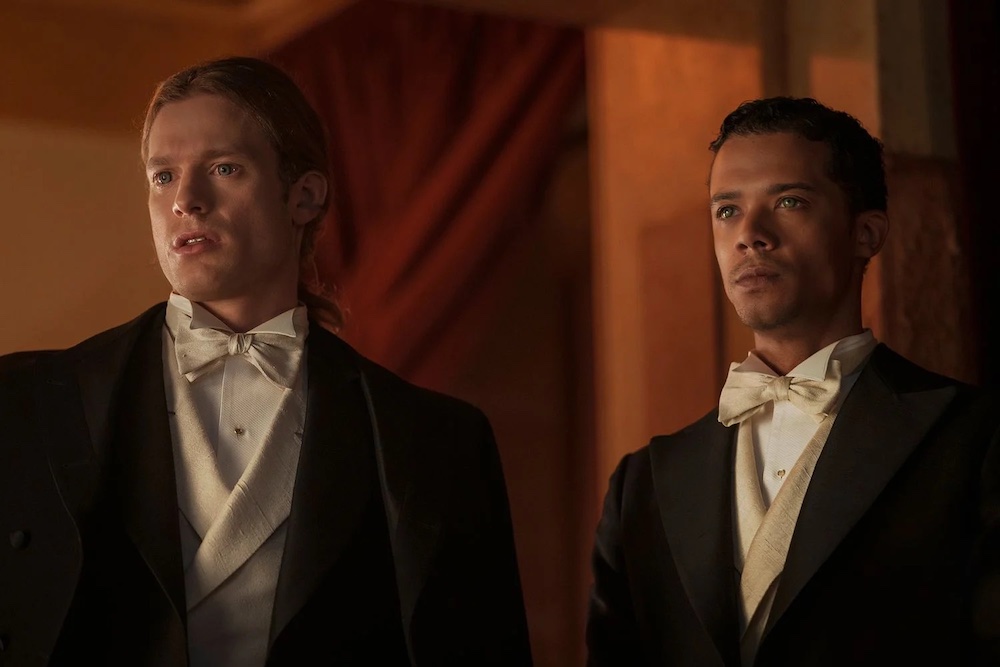 Aaah, the new Interview with a vampire series, another case of Well the author never SAID that half the cast is NOT comprised of nogs. Fuck Anne Rice anyways. Her fagpires were one of the steps leading to Twilight.
Iä! Iä! Cthulhu fhtagn! Ph'nglui mglw'nfah Cthulhu R'lyeh wgah'nagl muh'fugen bix nood

How much will you wanna bet that the 18th century stuff will involve a lot more Critical Race Theory than before?
Autism attracts more autism. Sooner or later, an internet nobody will attract the exact kind of fans - and detractors - he deserves.
-Yours Truly

Holy shit, this is some next level autism.

Remember Lovecraft Country? One of the several attempts by the Left to culturally appropriate the mythos of everyone's favorite New England racist? Where the real cosmic horror turned out to be white supremacy all along? And where the thrilling finale ended with a ritual that rendered all white people muggles forever (I hope this makes more sense in context, but then again trying to understand Leftist logic without being indoctrinated yourself is like trying to read the mind of Azathoth)?

Aside from (thankfully) getting cancelled after season 1, the production also had another problem in that the first season was adapted from some retarded novel that didn't actually have a sequel.
This is what they came up for their season 2 bible:
BEHOLDShow 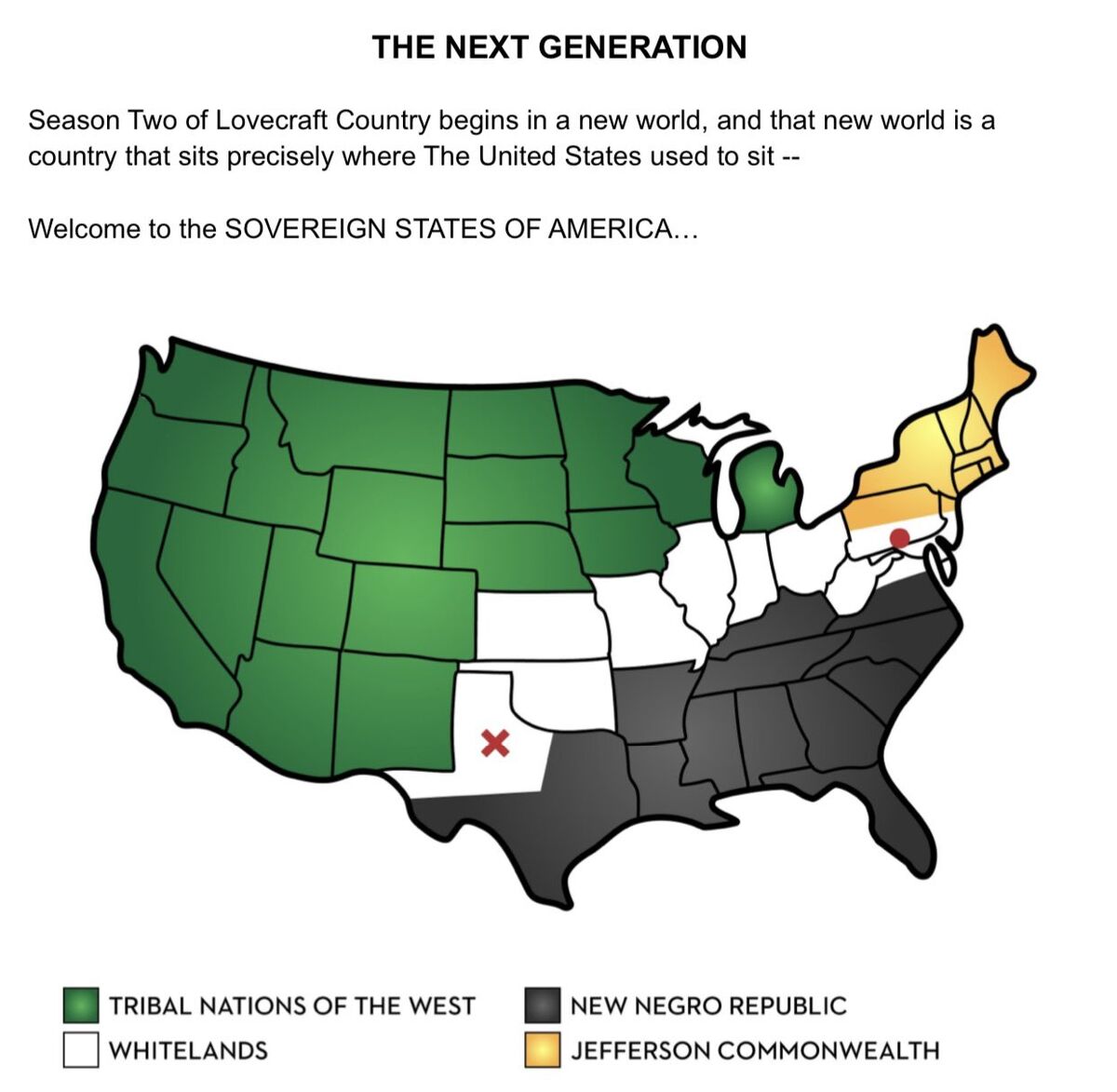 I like to imagine that the white people act as a protective barrier, shielding the noble Native Americans from the vile savages from the Dark Continent.
Autism attracts more autism. Sooner or later, an internet nobody will attract the exact kind of fans - and detractors - he deserves.
-Yours Truly

Fucking hell. You could hook Lovecraft's dead body up to a power plant and run the city for years, using the energy generated by his spinning. Just pop out a new shitty (((lovecraft))) tv show every few years.

Thats the most nonsensical predictive map I've ever seen. Besides all the other things wrong with it, it's really nice of them all to respect the current state borders.