Well how historically accurate can a game system even be to begin with, with a name like Chivalry and Sorcery?
Were the witches real after all and burning them all was therefore the right thing to do?
It's a trap!
Top

So, you wonder if Jizzards of the Cucks is fagging up Richard Garfield's baby some more this PRIDE YEAR? 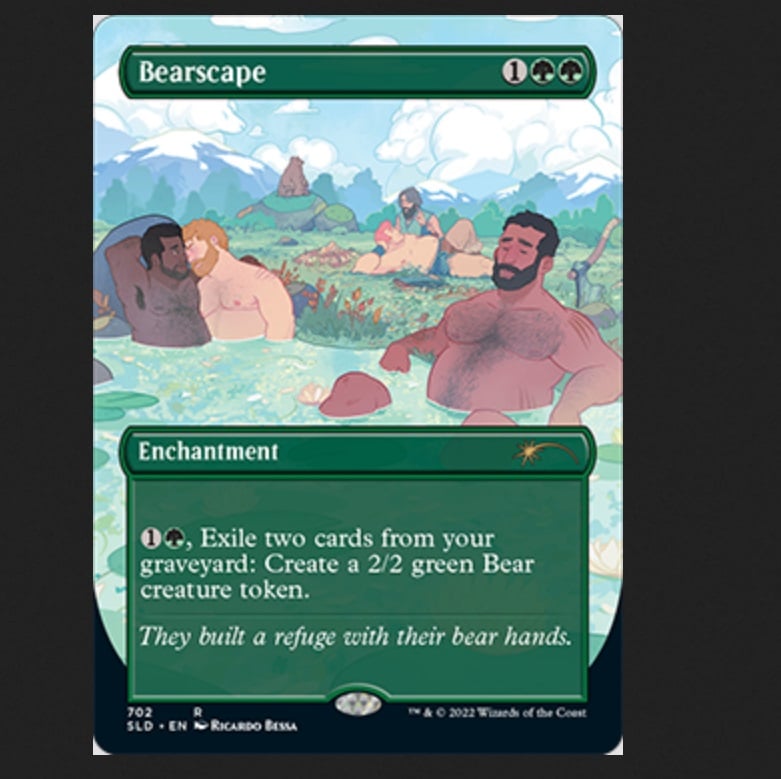 In KickScammer news, we also have some real beauts, I tell ya.

Kumbaya, or some shit.

I dunno, looks exactly like Into the Motherlands, why the need for a 2nd Afro-Futurist RGP?
The rules look piss-easy, are you trying to insult the intelligence of the nog players to grasp more than 2D6?

> includes pacifist routes
Hard pass.
You are much more than a brute with a club
A peaceful protester?
Honor your ancestors!
Whenever I try to pitch my Gestapo RPG to publishers I never hear back from them

Anyhoo, ever wanted to have a Jewish storytelling game? Look no further. The most stereotypical of hooknosed Jewesses got you covered :3
"But I want more Fags!" I hear you say. Don't you worry, we're not done yet. And yeah, this Untermensch from Berlin is proud that LGBTQStarter has picked his game for the frontpage.

And if you are wondering if the whole website is turning into an SJW bubble, have a look at their newest manifestos, were they proclaim to enforce a safe space for everyone grifters.
Iä! Iä! Cthulhu fhtagn! Ph'nglui mglw'nfah Cthulhu R'lyeh wgah'nagl muh'fugen bix nood

You see, that gay Magic card is funny 'cause "bear" is a gay slang for big, hairy faggots.

>Tell your own version of the Exodus

How many of those are allowed to not be about black people?

Extravaganza: the Board Game!

Who is this even for? Are drags even diverse enough in Current Year?

Because Wakanda settings are the in-thing to do. The cream-of-the-crop in terms of "non-European" fantasy/sci-fi settings (who are also popular these days because they mean less white people).

Though personally, I prefer vintage Africa RPG from many moons before normies even knew what "Wakanda" is. Less identity politics, more "Here's some crazy shit for your murder hobos to murder".

The rules look piss-easy, are you trying to insult the intelligence of the nog players to grasp more than 2D6?

SJW geeks love simple rules since anything crunchier than "roll 2D6, maybe 3 or een 4 if you're using some retarded advantage/disadvantage system" is seen as "gatekeeping".
Though at least it does have a rules system. Into the Motherlands still hasn't figured out what to use afaik, even though the setting is based on a D&D campaign or something.
Autism attracts more autism. Sooner or later, an internet nobody will attract the exact kind of fans - and detractors - he deserves.
-Yours Truly

Aaaand itch.io has launched its own abortion bundle. Naturally a lot more bloated than the DriveThruRPG offering. A lot appears to be the usual shit they keep putting in bundles. It's like over 250 different items or something. No way I can find all the cringe, but let me try, anyways.
The one about giant gay robots combining with each other is definitely the winner here, with the hooker one a close second.

Also, how well did their tranny bundle do, anyways?
>falling 13k short of your 420k fundraiser for trans rights

Love that picture of the "divarse" game group for that kumbayah RPG, with the one asian guy clearly questioning what life choices caused him to get stuck with those screeching monkeys.
It's a trap!
Top

He knows he was only allowed to join for checklist-purposes. And I'm sure they've let him know that he is less equal.

designer's note on why extended actions can only give you a Green aka minimum success wrote:In the real world, a person can create a better product, write a better song, develop a better game, or otherwise do better at a task by spending more time on it – but the return on investment from spending more time is limited. George R.R. Martin can write a novel in a year and be confident it’s a good book (automatic Yellow result) but spending more time doesn’t mean he can guarantee it’s going to be his best book (Red result), no matter how long he spends. This rule is why we don’t have an ending to A Song of Ice and Fire and why game developers eventually “just ship” the product.

tl;dr: The game mechanics prove that George Arr Arr Martin doesn't have a high enough writing skill to ever finish his stupid series

That fat pedo should never have started this cancer.
It's a trap!
Top

Did you know there have been three Game of Thrones RPGs? Okay, technically two but the first comes in two flavors, and I'm counting those separate:

If you're seeing this and say "Boy, this sure goes quickly from 'My character sucks balls' to 'My character will never fail at anything'", then you have paid more attention than an entire team of "professional RPG designers".

When they eventually lost the license they re-released the game with the numbers and setting filed off. Somehow I doubt they've fixed the math.
Autism attracts more autism. Sooner or later, an internet nobody will attract the exact kind of fans - and detractors - he deserves.
-Yours Truly

Wizards of the Coast wants your money by officially replacing two monster manuals with a new one:

Mordenkainen Presents: Monsters of the Multiverse

>Includes more than 30 playable races—brings the game’s setting-agnostic races into one book, complementing the races in the Player’s Handbook

Which race isn't setting-agnostic in 5E? You've pretty much opened up every race and every class for any official setting touched by 5E, whether it makes sense or not.
And really? You guys are still using the term "race"? I think you haven't learned your lessons

>A multiverse of lore—includes updates to monster lore that refocuses their stories on the D&D multiverse, rather than on any particular worldOne might see this as a course correction from the early years of 5E, where everything was written from the perspective of the Forgotten Realms.
But it's more likely this is another part of their "DON'T STEREOTYPE!" movement, which caused the de-canonized Volo's Guide to Monsters to have a shitload fluff removed via errata. How dare a book meant to be an in-universe guide to monster's settle on orcs being generally evil and mindflayers being fucking assholes

I mean, what is even the point of blokes like hobgoblins if we can't stereotype? They're pretty much just orcs, but disciplined.

The update lore migh talso over-simplify the established lore for more virtue signaling. It's what they did during their "Not all Drow are evil" retcon last year or so:
>ignoring that "evil Drow have been corrupted by Lloth" isn't new (it's like the defining trait of the stereotypical Drow: their main goddess is a sadistic bitch who uses their entire species like a gimp)
>ignoring already established Drow resistance movements who prefer worshipping the gods of their pantheon that aren't complete douchebags, just so their two flavors of brand-new and super-reclusive good Drow come across as something stunning and brave
>devaluing Drizzt as one of the few prominent good Drow
>simultaneously validating the blight of Drizzt clones

I bet they're flanderizing the shit out of the "old" orcs. Nevermind settings like Eberron that have already done "Not every orc is evil". Fuck, they're even relatively nuanced and diverse in Mystara, despite the fact that their sourcebook was a fucking joke book.
Autism attracts more autism. Sooner or later, an internet nobody will attract the exact kind of fans - and detractors - he deserves.
-Yours Truly

Great. For drama-producing tranny queers they are pretty humble about it at the moment, but y'all can bet yer asses come the following (((minority month))) they will tout how AWARD WINNING they are.
Iä! Iä! Cthulhu fhtagn! Ph'nglui mglw'nfah Cthulhu R'lyeh wgah'nagl muh'fugen bix nood