I wonder if Zanzer Tem's dungeon (from the official introductory adventure from D&D 1st Edition) had accessibility ramps and non-visual markings to help the characters captured to be slaves in the salt mine. What was Zanzer's bathroom policies for trans people? Such important questions neglected for almost half a century.
Top

Catering to blind people would just attract Zatoichi, and we can't have that problematic orientalism and weebery in our elfgame.
Though I hope Awfully Queer Heroes will have success with this, so they can make a follow-up where the PCs explore the infinite quasi-elemental realm of genders.

The fake SJW players that have infiltrated the hobby are always obsessed with wheelchairs. It's a weird-ass fetish.
I think Wizards has even announced to make their adventure modules (or at least one) wheelchair-compatible, but that hasn't happened so far. Not that they need to, though. The infamous combat wheelchair can float, anyways (giving you all the "benefits" of living out your cripple fetish without any of the nasty side-effects that come from being a fucking cripple).

I should also point out that all places in the stunning and brave world of Extreme Meatpunks Forever have ramps. Even the evil hideouts of the evil faschists.

This has got to be the worst name for anything ever. Terrible to read and say out loud.
I'm also pretty sure you'll learn enough snippets of sign language by having an actual deaf person in your regular group - who would probably appreciate it if you play normal shit like D&D instead of Designated RPG For Deaf People.

Also pretty sure this is basically a LARP game without actually being a LARP game. Pretty sure at least the Vampire LARP has all kinds of hand signs to designate which stupid vampire power you're using atm (so you can tell from a distance which of the other weirdoes is pretending to be invisible).

Representation continues being the dumbest and most dishonest SocJus scheme.
Most people in wheelchairs were able to walk once. Those that weren't still wish they could walk instead. Why the fuck would my role play character that isn't me be in one and why would I want that ever to be the case?

Same with people that experience actual gender dysphoria. Pretty sure the faggot would rather just play as a female character than a dude with mutilated genitals.
SpoilerShow

Pretty sure the vast majority of these wheelchairfags aren't wheelchair-bound themselves, and if they are they're probably some attention whore with a heavy case of Munchhausen Syndrome.

This shit might also be another retarded case of the eternal crusade against various perceived "-isms" in the hobby: Negative modifiers for player races haven't actually been a thing since 4e, but you can bet these people are triggered at Orcs having lower-than-average INT.
Autism attracts more autism. Sooner or later, an internet nobody will attract the exact kind of fans - and detractors - he deserves.
-Yours Truly

I present to you: The most honest Cyberpunk RPG out there.

Many instances of cyberpunk in gayming have this problem that they're not actually "punk". You can't fight the system because the MegaCorps are too big to defeat, and in fact you're actually helping the system because your gnarly street samurai is just a glorified freelancer for the MegaCorps to send on quests.
At least this game right here just goes "Yup, you're working for the man alright. Have fun."
Autism attracts more autism. Sooner or later, an internet nobody will attract the exact kind of fans - and detractors - he deserves.
-Yours Truly


This game was originally created in April 2020 after my roommates and I were quarantined at home and got tired of throwing away the offensive cards in one of the card games we owned. So I decided to create a whole new game that was made for our communities.

Radical Queer Witches provide a non-oppressive and light-hearted alternative to other card games in the market. In this game, you'll find cards that play on queerness, decolonization, sex, spirituality, capitalism, accountability, and simply existing in the world as an LGBTIQI+ and/or BIPOC person. Raunchy, fun, and 18+. 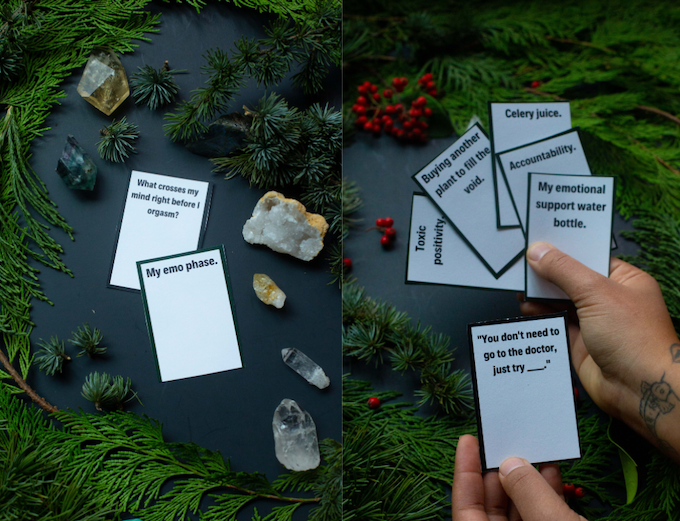 These screenshots are reading my mind.

EDIT: In other news, the coastal wizards are apparently trying to ruin Spelljammer (gonzo D&D in space) and Dragonlance (from that novel series) next. Especially the latter appears to be getting a royal spanking thanks to the enforced generification of D&D 5e - because heaven forbid they ever release a setting again that forbids certain race or class choices. All must be like the Forgotten Realms.

EDIT^2: And apparently the new Dragonlance stuff won't involve any of the original creators. Probably because Wizards doesn't want to pay them any money.

(Not that the original writers would ever want to work for Wizards again. They did some shady shit in the past where they would reject their stuff but then still make use of it in some retarded scheme to avoid having to actually pay them.)
Autism attracts more autism. Sooner or later, an internet nobody will attract the exact kind of fans - and detractors - he deserves.
-Yours Truly

Who would've thought there was demand for Cards Against Humanity but even less fun.
There wasn't? Oh.
SpoilerShow

>lore-light for folks with no idea what Dragonlance is

Isn't the job of a campaign setting book to educate about the setting? This is literally supposed to be the starting point for all things Dragonlance in 5e.

Do you guys have to pay like royalties to Laura and Tracy Hickman if you put too much Dragonlance in Dragonlance?

Imagine if you buy a Lord of the Rings roleplaying game and find out that it's not set in Middle-Earth, or any other place Tolkien has ever mentioned.
Autism attracts more autism. Sooner or later, an internet nobody will attract the exact kind of fans - and detractors - he deserves.
-Yours Truly

Sounds a bit like the Lawd Dem Rangs.
SpoilerShow