EU Megathread: The EU Strikes Back In the Great Meme War

Shitpost about Trump, SJWs, Islam and everything else about politics except economics, because that's too hard
Post Reply
335 posts

EU Megathread: The EU Strikes Back In the Great Meme War

The EU's war on memes has took another step into madness. Article 13 has passed.


So now I'm at risk of losing 95% of my daily minutes because I can't meme... this will certainly be the last nail in the coffin for me...
I'm in your bedroom, folding your clothes.
Top

There is still hope. The upload-filter has yet to be set in stone, and they're already working on a bunch of exceptions and loopholes.

I'm currently more interested in the "Google has to buy licenses from news sites if they want to keep using news snippets in their search results" part. We actually already had that one in Krautland, and guess what happens when news sites dare to extort money from their traffic source #1?
Autism attracts more autism. Sooner or later, an internet nobody will attract the exact kind of fans - and detractors - he deserves.
-Yours Truly

Spain's tried something similar and Google News, which was free, completely left the country. And small business are fucked. They can't afford millions in AIs and bots :/

You have ONE hour to remove something. So if you post something in a hurry you have to wait for an hour and hope you won't get sued.

I can make money off memes now, though!
I'm in your bedroom, folding your clothes.
Top 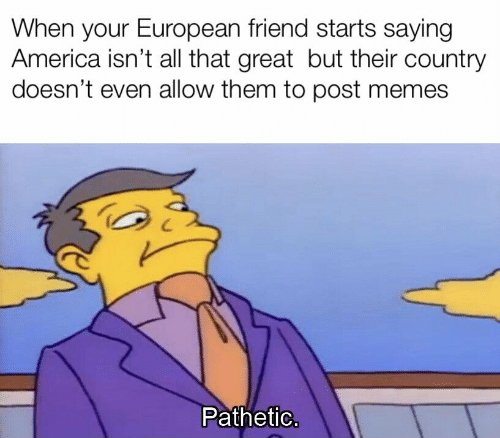 I would say I feel sorry, but you fucks have been making fun of the USA with net neutrality.

I really would like to see them enforce this

The EU Strikes Back In the Great Meme War


Article 11 proposes a tax on posting hyperlinks on the internet, while Article 13 would demand an AI detection based filter on websites to prevent any copyrighted content from being uploaded.

Oi mate, have you paid your Hyperlink Tax?

And you know how Youtube's shitty algorithm for flagging content on Youtube automatically has tons of issues and often false flags? Well the EU wants that for the whole fucking internet, which will make posting many memes illegal. Well played EU, you lost the first meme war and rather than compete you know your side is shit tier at making your own and instead you'll just destroy most of ours. Or try to.

I think Metokur did a stream about it on his second channel, I haven't heard it yet but the title was about laughing at the EU again so I assume this is what he talks about.

EDIT: I merged topics, while it works for Internets too now that I think about it, it's about the EU being retarded so I'll make this the designated EU shitting thread.

I basically quit following anything EU related since it's all a third world cess pool of mudshit rapefugees now who just make fun of us burgers and our "precious guns", but god. DAMN. You guys are soooo fucked.
-The user formerly known as CIANigger
Top

Here's the stream for the curious.

Poonoo wrote: ↑
Thu Sep 13, 2018 3:33 am
And you know how Youtube's shitty algorithm for flagging kahntent on Youtube automatically has tons of issues and often false flags? Well the EU wants that for the whole fucking internet, which will make posting many memes illegal.

I think it's interesting that the EU is so distant and disconnected from objective reality, they will actually go out of it's way to copycat a company that they've been fining up the wazoo for years. Jewgle and the EU deserve each other, considering that both entities are run by smug, petulant, hysterical, technologically illiterate, power-tripping sadcows.

If not even the Deep State or the Silicon Valley AIDSniggers can regulate the internet, I don't see why the EU cucks would even put up a pretense of doing the same. They should stick to trying to prevent their own inevitable collapse instead.
Top

I figured enforcement was just gonna be the policeniggers beating you up for posting the facebook frog. Then I remembered that at least in the YouKay if you have an unloisensed noife you're invincible.
Top
Post Reply
335 posts