Greekistan - The most accomodating of Countries

Shitpost about Trump, SJWs, Islam and everything else about politics except economics, because that's too hard
Post Reply
81 posts

VoiceOfReasonPast wrote: ↑
Tue Jul 21, 2020 5:42 pm
Nope. We won't let them since that would fuck up the entire Euro something fierce.

Also, fun fact : did you know that some of the northern suburbs of Athens used to house japanese people. Shit, not even nips that were here for diplomatic reasons, nips that were rightfully and fully normalized as proper greeks and even had either full-japanese children(some authors and one or two voice actors are actually greek, one from her grandpa's time) and others married a greek man / woman and had kids. You used to see about 1 japanese guy out of a 1000 greeks in those suburbs and they actually raised the living level of the neighbhourhoods, actively participated in social issues and made the place better.

Then 2008 struck and shit went really sideways but a lot of them persevered despite the budget cuts, shops closing etc, you know, typical stuff we went through. Here's the things though : I left Athens in 2009 and when I returned in 2011, every single one of them was gone, went back to japan. Taking even their spouses and kids with them to actually have job stability. So, ok, let's say we lost about 1000 members(japanese, greek, happas) of good, honest working people. It's ok, we can always replace them, right?

In 2007, we also had emergency due to the resignation of the then Prime Minister, Karamanlis and people elected Jeffrey Andrews Papandreou also known outside of the USA and the White House as "George Papandreou, the younger" and well...just like his forefathers, he did what America wanted those years. And when Obama came to power, well...let's just say that suddenly, all those ignored pleas of niggers drowning in the borders of Egypt and Crete suddenly didn't go unheard of anymore, despite never reaching our waters. Fast forward a few years later and now, the Northern Suburbs have 1 nigger out 500 greeks. As legalized citizens of course, as instructed per Mutti Merkel and Badongo Obongo.

Fun Fact, a lot of our upper class / nouveau riche faggots, started adopting niggers left and right, as if adopting gypsies wasn't enough. Now, you have greek kids that are finally recognised for the great contributions they do around the world and the great "adversities" they faced so that Disney can make movies out of them. You know, like "John Sinna-Ugo Antetokumbo" or "Giannis Antetokoumbo" as he's officially known, back when PA.SO.K. opened all them fucking borders for every faggot to come in because we just loved having traitors govern us, like the faggots we are. Fuck you Andrew, I hope you and your faggot father rot in whatever Hell you believe in and I hope your faggot retard of a son knows the kind of blood that is on your hands.

ban wrote: ↑
Fri Aug 14, 2020 9:08 pm
Also, fun fact : did you know that some of the northern suburbs of Athens used to house japanese people. Shit, not even nips that were here for diplomatic reasons, nips that were rightfully and fully normalized as proper greeks and even had either full-japanese children(some authors and one or two voice actors are actually greek, one from her grandpa's time) and others married a greek man / woman and had kids.

Dem Saint Seiya otaku are fucking nuts, I tell ya

Not nuts enough, it seems

Not nuts enough, it seems

The samurai fear the blacks! 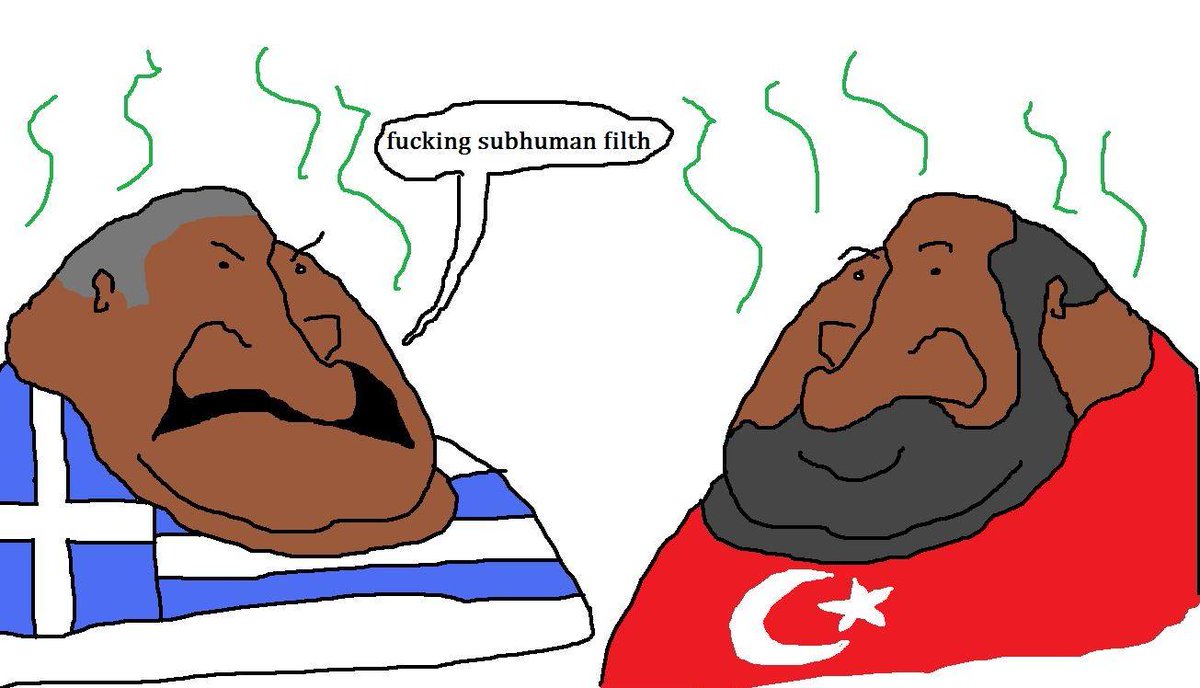 I can see why a Turk from Canada like you though, would put two turks, fresh out of their mudbath they like to call hamam, arguing about who's greek and who's not, since these fine mongolian gentlemen always secretely wanted to be white and most important of all, Greek. An honest mistake from the kangs of Asia.

In other news, I don't know what exactly happened during July but something seems to have collectively snapped within the greek populus and there is some kind of unrest these days. It's not the kind of unrest one would feel from living in the center of Attica for 15 years, locking up everything so that Albanian burglars won't come in at 7am. It's more akin to a civil unrest and the citizens slowly leering back at the refugees, slowly people getting more on edge and expressing their opinions, no matter how non-racist or how actually racist they are, much more openly not just on the net but outside as well and there's been a wave of greeks out there who don't just actively hate the current administration, they want to rip capitalism out of our system, along with the refugees and the E.U. Shit, people are actually saying that Michaloliakos and Kasidiaris are useless and tame as solutions now. The leaders of the Golden Dawn(ok, Kasidiaris now has a new supporting party that's equally bad)...useless and tame solutions.

Then again, these past few months, a lot more hunting licenses have been issued and a lot more gun permit have been given than in the past years

I think we can all agree the Gyro is far superior to the Shawarma.
Top

People really underestimate how many good things the refugees from Asia Minor(and some earlier immigrants) brought over when they came. It also helps that their version of the wrap called Pita is far superior. It's too bad that these days gyro has become way more popular than the usual souvlaki and thus really good souvlaki is hard to find.

Are Gyros different in Greee because everywhere in Canada a Gyro is more or less a beef/lamb doner with tzatziki and feta.
Top

RAPEMAN wrote: ↑
Mon Sep 07, 2020 11:34 pm
Are Gyros different in Greee because everywhere in Canada a Gyro is more or less a beef/lamb doner with tzatziki and feta.

You sure those aren't just Turkish kebabs?

Nope. My local Greek restaurant is lamb and beef a long with many Greek chains. Of course the souvlaki is either skewered pork or chicken. In Canada we actually have a local variant made with beef and topped with garlic sauce called the Halifax donair, a bastardized english term for Doner. A lot of Arab places make the donair along with more traditional sliced kebab wraps.

Of course the owners of the Gyro shop are dark tanned so maybe they are ethnically Turks acting as greeks. I'd ask but I'd probably get a swift punch to the face as an insult to either ethnicity.
Top
Post Reply
81 posts