Talk about the life consuming, celibacy inducing hobby that is all the rage these days.
Post Reply
60 posts

Time to sperge about the new DMC entry. Spoiler to not make this post huge and ugly.

I'm hoping the Gamescon delivers on the 60FPS promise, the Resi7 engine(called it) doesn't have feats beyond the titular game it was first used one. This whole situation, the more western setting, the infected town, the radical change from mechanics(DMC1 was Onimusha + Castlevania, DMC2 was the Matrix coupled with some prototype for Chaos Legion), Itsuno on the helm but executive producer and producer of DMC1, 3, 4, Resi5 and 6 Hiroyuki Kobayashi is absent and thus his favourite MT Frameworks and very japanese aesthetics are missing. Couple that with the western executive producer this time, like in DMC2 and we have...this :


Sperge, look at your own riskShow
I hope it turns out good. And given how most leaks turned out for the most part checked has me worried even more :

The new game seems to be abandoning the old formula of intertwinning between Kobayashi's two key franchises : Sengoku Basara and Devil May Cry until they reached a peak(DMC3 -> Basara 1,2 -> DMC4 (PC) -> Basara 3, 3 Utage, 4 -> DMC4 SE -> Basara 4 Sumeragi) but now with the talks of "open areas, bosses that move from areas to areas but no stamina system" and this scene :

Suspiciously mirroring scenes and places from God Eater Burst, the plot being focused on a mysterious hooded character that hurt the newcomer(relative) with the demon apocalypse happening and a demonic sprouting seems to be a little to close to home with this, the new monster design :

Yeah, and given how the leaks said that as of the time they surfaced (November 2017) the game had been in development for 2 years and worked on for a little more than that. God Eater 2 Rage Burst was released at that timeframe and it was the time were Monster Hunter felt a little threatened due to the series moving from PSP and Vita to the PS4 and Steam, while MonHun was at the 3DS. Now with MonHun World, Capcom has nothing to fear but God Eater was initially made as the fusion of cool combat and Monster Hunter, bringing the spectacle to the genre and focusing more on technical combat rather than plain stats. Of course that floundered in the process but the first 3 games were about that. Now what if Capcom tried their hand at their own God Eater, their own fusion of Monster Hunter and DMC? They've done something similar before, Basara was essentially Samurai / Dynasty Warriors with DMC combat. It stands to reason they'd do something similar here, especially when MonHun is back on top of the world and God Eater 3 seems to be ultra niche and only japanese people care about it. Then the things the leaks said and it seems all the more plausible. Heck, I expect Nero to need to get cash or demon materials to upgrade his tools unlike Dante.

If anything, I expect the game to be God Eater 2 Rage Burst's animu storyline as the overall story, while Nero's story being the DMC1 Novel story with Nero instead of Dante(more on that later) and perhaps Vergil's story will be spliced in it there but if I'm going with the GE comparissons, I expect him to become corrupted like he was as Nero Angelo :

then he'll go full corrupt and Nero will get back his Devil Bringer and dual wield the Yamato and the Red Queen to bring Vergil back :

And then have Nero and Vergil fight the corruption inside him :

before you gain Vergil as the final character and resume the plot.

If you think this sounds like fanficky bullshit remember : DMC1 and DMC3 are the fanfiction version of Divine Comedy's Hell and Purgatory both times. WIth Dante finding his beloved "Trish"(Trish in DMC1, Lady in DMC3) along with catharsis for his family and himself at the end with Paradise(the closing act) like in the poem.
Nero's new design :Show 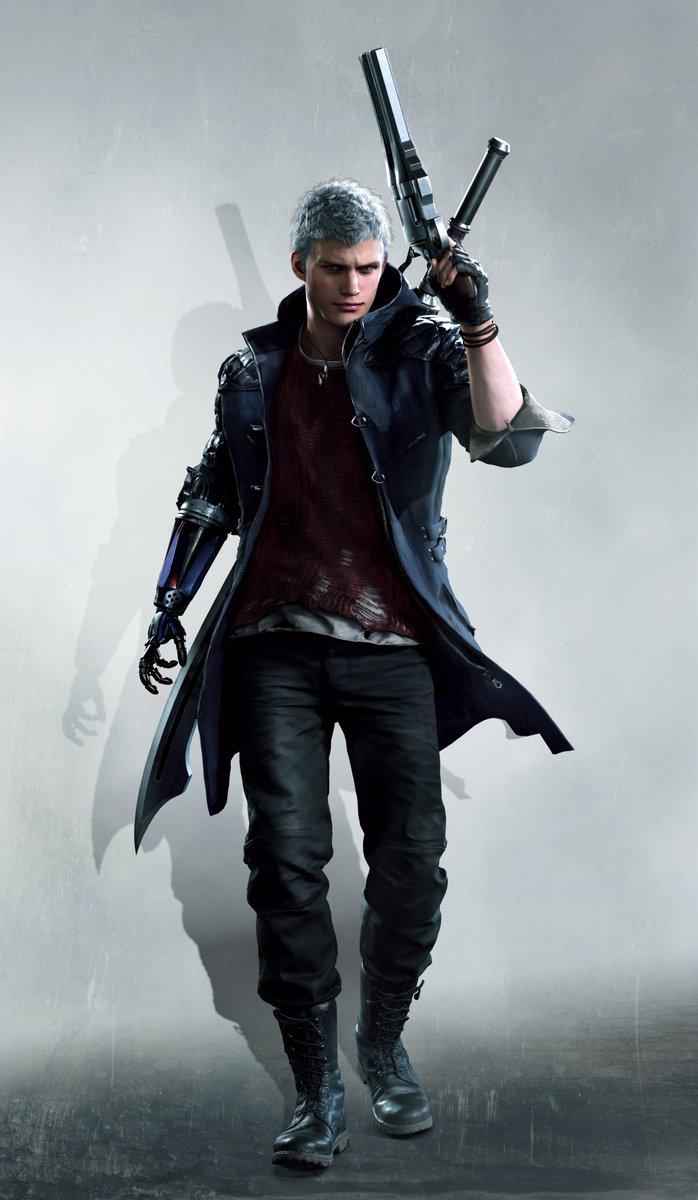 Now I know who had the idea to give Nero some of Zangief's moves in DMC4.

Though I don't know if I want Kyrie to change from Orihime in a nun cosplay to a /fit/ - former wrestler chocolate waifu. 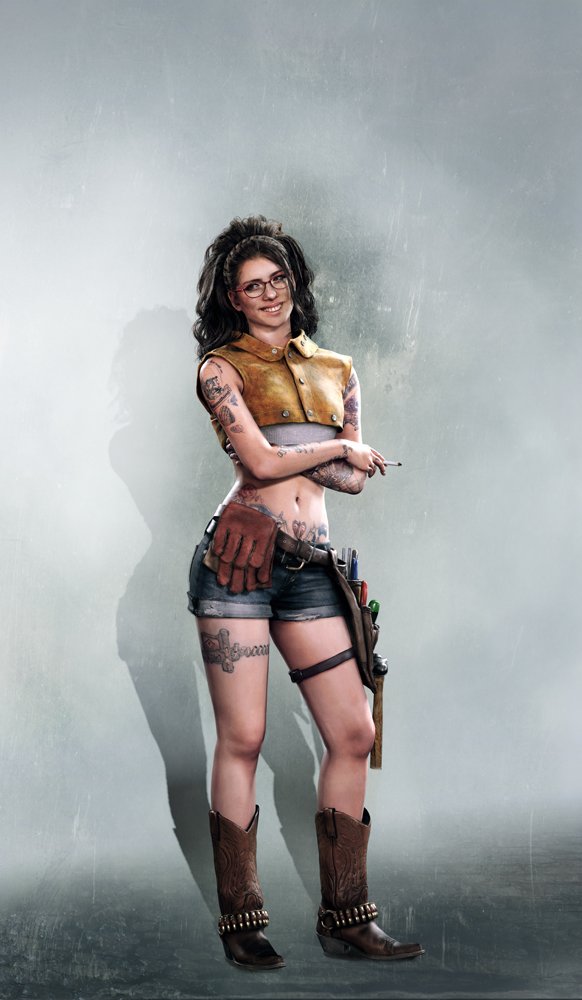 Is actually (((Nico Goldstein))), granddaughter of (((Nell Goldstein))), the creator Ebony and Ivory at the request of Tony Redgrave(Dante's alias) in the DMC1 novel after Dante was pumelled by a mysterious man in bandages named Gilver(Corrupted Vergil) and it was her last creation before Gilver murdered her. Now Nico is Nero's partner and her inventions, the new arms Nero uses for battle, are what she's useful for in a story. Also she's a pretty big dig at : 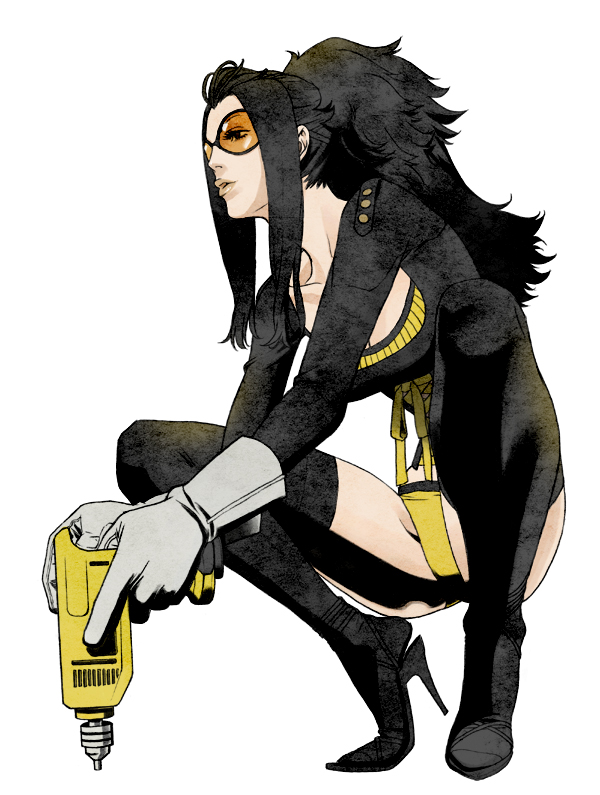 If she had the personality of an edgetard otaku like Travis instead of being sarcastic and quippy like Nero is. Kobayashi and Suda worked together for Killer 7 but I don't know if Itsuno was part of that project though given how bad the blood between Capcom and Suda is(save for Mikami), I guess even Itsuno wanted to take a dig at him.

At least the music is good. Beyond the pachinko soundtrack and Vergil's themes, the series never caught me. The remixes for the MvC games are great though so, here's hoping the emulate those styles instead of the usual fare.

And supposedely every character gets his own theme. Here's hoping Bosses do the same to have some MGR-tier battles.
INB4 Holy fuck ban this is way too autistic gee willikers ban, calm down.

God Eater 1 had the part about someone getting corrupted and shit. God Eater 2 is about nakama powers. I hope they don't follow that one.
Autism attracts more autism. Sooner or later, an internet nobody will attract the exact kind of fans - and detractors - he deserves.
-Yours Truly

God Eater 2 showed the GE1 part via the nakama powers that allow you to experience the past. It was basically Vergil losing to Mundus and why he became Nero Angelo before you saved him at the end of GE1. I'm afraid they'll go full nakama to save Vergil, if the story takes them there and Vergil isn't a secret story where you experience everything from the antagonist's side.

As long as they don't pull an utter bullshit ending with the demon tree becoming flowers and unpolluting the world while reviving dead friends, we'll be ok.

Or that the demon tree unpollutes the world because some pop idol uses a live broadcast of her song to create a Deus Ex Spirit Bomb.

(Though if that happens, I hope they'll sing Bohemian Rhapsody)
Autism attracts more autism. Sooner or later, an internet nobody will attract the exact kind of fans - and detractors - he deserves.
-Yours Truly

They had the chance to do something similar with Kyrie in DMC4, they didn't and I'm happy for that. Doubt they'll bring her to do that either. Can't help but laugh at the mental image of what you described though.

Where does the DMC anime factor into this master scheme?
Top

I'll read your sperge later but based on the E3 trailer, this shit looked like fucking DmC2 with NuDonte. I don't at all care for the redesign or whatever the fuck they did. I have no faith in Capcom to make a good game.

A little more optimistic given how Nero moves here and his new moves seem ok. Nice one Itsuno-san "uncanny valley of action", Ninja Gaiden called and wants it back.

I have no opinion one way or the other.
I'm in your bedroom, folding your clothes.
Top
Post Reply
60 posts