Talk about the life consuming, celibacy inducing hobby that is all the rage these days.
Post Reply
4074 posts

Yeah thats my problem with BOF3 is its SUPER slow. Your young Ryu for a good 10-15 hours. You don't really need to worry about masters in order to beat the game though.

What made me ragequit was the loading times. I don't know if it's a UMD problem or if the original had long loading times (ps1 games often did) but there was soooo much fucking loading and lag in the entire process. A battle would start, and it would lag/load. Battle would end and there would be loading/lag. Lag in between attacks. Shit was insane.

I love BoF3 as a game. If someone released an HD version for PS4/PC that ran at 60fps with no loading times, I'd call it one of the best games ever made. Especially if they added quicksaves for the long dungeons.

BoF IV is a slow start too, but they simplified learning monster skills and it still feels like the game gets rolling with your permanent party a lot faster. You spend a good three hours as young Ryu in BoF 3 doing random kid shit before you even start with quests.

While I also love BoF IV, III is just my favorite, precisely because of the complexity of the Master stuff. I also don't mind a slower-paced, no melodrama story like III has. It's comfy as it can get for a JRPG.

You know, I actually got myself a Nintendo Bitch. My main keikaku is of course to get Smash Sisters and Hatsune Miku: Project DIVA Mega Mix Monsta Hanta: Dabburu Kurossuru. But for starters I figured: Why not get some Platinum Games stuff?

I actually played these in the reverse order, but I like to bring you good news first:
Bayonetta 2Show
Oh man, this is like the return of an old friend. Wonderful sequel, even if it feels easier on normal than the first one. There's a lot more variety in weapons, with the only onese I tend to avoid the most being Undine (don't feel fun to use, and they hit that weird middle ground between speed and power that just makes them seem meh.). My favorite combo is probably Chernobog paired with Alruna or Rakshasa, mostly because the AoE and Wicked Weaves are batshit insane with this one.
Takemikazuchi's a pretty fun alternative as well, seing how this fucker hitstuns everything and everyone. I beat that "Don't get hit"-Muspelheim challenge against the most aggressive type of angel centaur by just whacking him over and over again with this one. Nothing he could do.

The new pistols feel a bit lackluster this time around, but I appreciate the change to Bullet Climax. I don't think I ever actually used it in the first game because the sudden camera change was a bit distracting.
And while I didn't mind the vehicle and shooter sections in the first one, I appreciate that they cut that stuff down, since those tended to drag on at times.

My main gripes with the game are the plot being some mashup between sequel and prequel that pretty much leaves little room for a new bad guy unless they introduce Cthulhu or something, and the Infero bosses.
Mind you, the first real Inferno boss (the potentially cybernetic skull manta ray) was pretty rad, but the other ones? I was pretty hyped when I ran into Not-Phantom, since I was hoping for some Devil May Cry 1 nostalgia. But then the fucker just kept his distance and lopped weaksauce fireballs at me. I just dodged a bit and ploinked my bug arrows into him until he was dead.
Alraune was an even bigger letdown. She was somewhat hyped up, but then I got Platinum on my first try thanks to the power of Hammer Time and telegraphed-as-fuck attacks. I struggle more fighting against some of the normal enemies you run into in Inferno.

A strange addition where these chests that could only be accessed by collecting their pieces in a certain amount of time. The strange bit comes in that the very first chest you find has a rather strict time limit, while all the other ones give you more than enough time to collect everything, even if you fuck up and overshoot one piece multiple times.
Astral ChainShow
What in the ever-loving fuck happened here?

So it's already pretty weird - at least IMO - for a Platinum title to give you a silent protagonist. So you have no one like Dante or Bayonetta to accentuate the action with a good dose of attitude. The closest thing you get here is having the protagonist's brother Akira whine and bitch for way too long.
You also get to pick between a husbando protagonist and a waifu protagonist, with minimal customization options. Really I think this whole system was just used for corner cutting (pretty much 95% percent of your fellow cops have been made with the same character generator).

The game's also kinda ugly, with a bit too many filters applied over everything. Bayonetta 2 looks way nicer, and that one was made for the Wii Fucking U.

Combat itself isn't bad, if a bit slower than Bayo 2. What rustles my jimmies though is that the camera is way too fucking close and way too fucking low to the ground. That shit is like your worst enemy. Fighting multiple enemis (which happens a lot) is a fucking nightmare, even when fighting a wide, open area (which doesn't happen quite as often). Fighting a single boss is more manageable thanks to the lock-on button, but even that one fails at times, like say when the boss charges right at you and you suddenly see nothing but his crotch.

They've apparently been really proud of that feature where you send out your Not-Stand and have it yank its chain to launch you to him, so there's a bunch of platforming sections which are annyoing as hell. You could probably get rid of a bunch of them if your character could actually jump. There's like a whole set of mid-air combos you can't actually reliably access without doing some ground combos first that can leave you in mid-air.

Apparently their solution to enemy cheapness thanks to the horrible camera was giving your protagonist cheesy shit himself. The last Not-Stand you get can give you a barrier that lets you no-sell the next three hit. The one before that not only has a Skill that auto-stuns everything around him, but also has a feature where you can use him as a mount. Riding around like that really cuts down on your offensive capabilities, but you auto-dodge everything while doing so. See a boss wind up for a big attack? Just ride your Doggie Stand and you're literally untouchable.

(Though careful doing that in the Astral Plane. There are bottomless pits all over the place, and you can't nudge the analogue stick without your doggie launching himself in that direction.)

There's some bizarre moment during the final boss fight. You get hyped to fight what is effectively an Angel from NGE, but then the whole sequence is just more platforming before you get sucked inside the giant abomination where you fight the actual boss. Dafuq?

Also why in the ever-loving FUCK do I have to take pictures of enemies DURING COMBAT to earn the PRIVILEGE of reading their fucking bestiary entry?! And you'd think this would get easer with larger enemies, but it doesn't, since the "hit box" for these photos is picky as fuck.

And why are there stealth sections in my Platinum Game? I know those technically existed in Raiden Revengeance, but they weren't actually mandatory. You could always just fight your way through.

On the plus side, you can probably meme the premise of "Violent cop beats up illegal immigrants from another dimension"
Fun observation when looking through the used Switch games: Not a single copy of MonHun to be found, but a lot of Pokemon.
Autism attracts more autism. Sooner or later, an internet nobody will attract the exact kind of fans - and detractors - he deserves.
-Yours Truly

VoiceOfReasonPast wrote: ↑
Wed Mar 18, 2020 7:12 pm
Fun observation when looking through the used Switch games: Not a single copy of MonHun to be found, but a lot of Pokemon.

I'm not even remotely surprised. Why would you ever sell a MonHun game? You can always come back years later for a couple of hunts. But what do you do with a Poggermans after you caught 'em all the tiny new index?
SpoilerShow

Oh, and another weird thing Astral Chain does is introduce its version of the Devil Trigger right before the final stage. I legit forgot I even had that option.
Autism attracts more autism. Sooner or later, an internet nobody will attract the exact kind of fans - and detractors - he deserves.
-Yours Truly

Nioh 2 looks pretty good tbh. Character creation should have been in the first game.

If it's going to be low skill trash like the first one I'll pass that one as well.
SpoilerShow

Souls games have always been low skill in a sense. The challenge of them is cerebral, not mechanical. 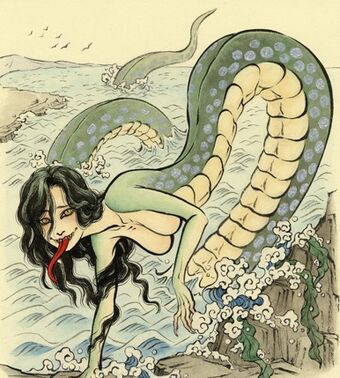 Ah man, I've got a weakness for monster girls. It's the thinking man's fetish. Just imagine how wonderful she'd be at making out and hugging you would be.
But Nioh was beyond simplistic garbage well worse than the Souls games. Really a bad copy of them, as much as it hurts me to say that because it sounds like hipster Vaaty faggot shit saying that but it's true.
SpoilerShow