I never paid attention to magusx1s videos much but i didn't know he was that bad. I remember he was close friends with lenscapproductions/trey sessler/mr anime aka the anime reviewer who killed his parents and almost commited a school shooting before turning himself in but thats aboit it as far as shady shit i noticed.
Top

Guest wrote: ↑
Sun Dec 22, 2019 12:18 pm
Magusx1 however....boy where do i begin with that piece of shit, its no secret that hes a weeaboo filth himself but that hes also a massive douchebag with a very huge ego and quite a very disgusting elitist attitude in general, theres also the fact that hes also an abuser in the most horrific fashion like him being a wife beater (which is why he actually "moved out" aka got kicked out) and abusing his own kid to gain sympathy from the few fools that still watch him as his dwindling "fanbase" died very fast as soon as he started attacking random people (people he knows jack shit about mind you) or the fact that Magus would always throw a ginormous temper tantrum over on Twitter over the most minor bullshit ever

think Lupa but as a creepy deformed mexican guy and you get the picture lol.

Theres far more things and other reprehensible shit hes done as well but i wanted to at least give you an easy n quick answer when it comes to someone like Magusx1 and what an asshole he truly is.

I'm sorry to hear about MagusX1. Granted, it's been well over a decade since I've chatted with the dude, but he seemed to be an alight fella to me personally. I did hear he's become quite the DRUMMAH whore over vidya in recent years, but I haven't cared enough to investigate further. I had no clue about him abusing his wife and kid, but that's chubby soda-chugging Mexicans for ya, I guess!

What else do you know about BigAl and Cuckscream? From the way you typed your post(s), it seemed you were more than a casual viewer of them. Perhaps a former friend/acquaintance?

Feel free to inquire about the New York trip, the Chicago trip, all the batshit insanity that went on behind the scenes and other related drama.

I never gave my side of the story because I was too much of a wimp and didn't want them to make videos on me ;.;

I don't care anymore. Let's get this over with, I guess!

Why did random dce retire?
Top 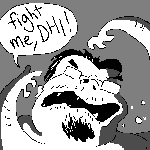 He got salty that no one watches his videos anymore, so he took his ball and went home.
Top

This the video description of his LAST VIDEO EVER

"So here's the thing.

I officially hate this website. Now when I say that, I want you to understand something. I do enjoy a small amount of content, produced by highly talented people who put in the time, energy and passion for what they clearly love and enjoy. I'll continue to support them whenever they upload new videos and will sing their praises... On other platforms.

Yet as I said, that's a small amount of content. The rest is manufactured, dumbed down, non offensive, safe, familair, predictable and all around terrible videos. Designed to sell adverts or made by patronising dunderheads, who have to inform their audience "make sure to like, comment and subscribe!" like they're all talking to fucking children under the age of 7!

So I decided rather than add to the problem, I could just leave. I knew my time was up and decided to seek my enjoyment elsewhere on the Internet... Well, before it gets policed and censored into oblivion of course!

More to the point, I feel I have nothing left to prove. I have lost the passion to make videos, or more to the point, nobody makes the kind of videos I enjoy anymore. I COULD continue to make nonsensical videos that are considered "random" but that's not what is needed in "the current year" and is burried under the likes of JeremyJahns, Death Battle, GameGrumps, WatchMojo or whatever.

To those who miss me, I appreciate that you care, but you have to understand. Guys like me are not welcome on Youtube, because I dare to have a stupid sense of humour that isn't "Big Bang Theory" calibre or constantly referencing how much people hate "the current President!"

To prove my point. I quickly through together a video to mirror "the good old days" and I am so confident that nobody wants this style of video anymore, that there will be a higher dislike bar than the like bar."

Behind the typical DCE snarkiness, you can see he's jealous and frustrated that he can't pull the numbers that other YouTubers can. It's the tale of "the fox and the grapes," basically.
Top

Speaking about dce his brother mj knight is still active on youtube funny enough. While i wouldn't exactly call him a sucessful youtuber(his videos rarely crack 100 views), it kind of wonder if hes the more sucessful of the two in life since dce gave up because he wasn't getting views while mj seems to not care as much.
Top

jumkey mones wrote: ↑
Fri Dec 27, 2019 4:07 am
Speaking about dce his brother mj knight is still active on youtube funny enough. While i wouldn't exactly call him a sucessful youtuber(his videos rarely crack 100 views), it kind of wonder if hes the more sucessful of the two in life since dce gave up because he wasn't getting views while mj seems to not care as much.

Oh, he absolutely is. MJKnight has worked at a deli for forever. I think he has a managerial position, now.

DCE needs to mooch off of MJKnight all the time. Big surprise that DCE, someone who pissed his 20's away calling out 13-year-olds on YouTube, doesn't actually have any life skills.

Don't get me wrong. MJKnight is a failure in his own right, especially when it comes to women (will elaborate upon request), but at least MJKnight had the sense to not take YouTube so seriously and get a life outside the internet.
Last edited by nume26 on Fri Dec 27, 2019 6:21 am, edited 1 time in total.
Top

That's really obnoxious, I agree. But I also recognize why it's a thing, and it's not made for the purpose of triggering pseudo-galaxy brain assholes like DCE. If people want to actually be a YouTuber for a job, they need to remind people to subscribe. That's just how it is in 2019. It's also a bizarre reason to leave youtube altogether.

This feeds back into his overall hypocrisy. He's defended movies and video games for sacrificing quality for profit. He's also "called out" people who make a big song and dance out of unsubscribing or leaving youtube. His whole rant here is a bizarre fusion of these two things, so this is exhibit 4374367436 of DCE having no integrity.

I COULD continue to make nonsensical videos that are considered "random" but that's not what is needed in "the current year" and is burried under the likes of JeremyJahns, Death Battle, GameGrumps, WatchMojo or whatever.

I can count on 1 hand the number of times I've talked to MagusX1 but he seemed chill. He was way older than the rest of us. Maybe late 30's? He had a 4-year-old in the background of some of his 2009 videos, so at least he had a family and his own place. Seemed to be a geniune guy, who just wanted to talk about anime.

Darkscream217 is a whole nother ball game. He might've gone to community college once for anime club, but other than that he was a NEET shutin. He was also a GIANT suck up to Hellsing, Asalieri, JKTIM, DCE, and BigAl. There's a reason why Darkscream did a commentary on every single petty drama video ever. Then, in the rare moments when the drama well ran dry, Darkscream would pit his friends against each other, so there would be more videos, and therefore more shit to do commentaries on, and get more subscribers. The Nawkids fiasco was 100% his fault.

He's just a giant two-faced piece of shit. More than willing to throw his friends under the bus for delicious clout with JKTIM, DCE, etc... even as late as 2019.

I hit him up in March of this year, and we seemed to have a genuine conversation. He acknowledged that people backstabbed me for no reason (long overdue but better late than never) and even got real with me and told me some pretty personal shit that happened with him in 2009.

Then, only months later, he was on JKTIM's facebook talking shit about me in a status update and adding more fuel to THAT 7-year-old fire.