Bestiality is unhygienic and contributes to the transmission of zoonoses, and people isn't forced to like or accept it just like they aren't forced to not eat meat
Top 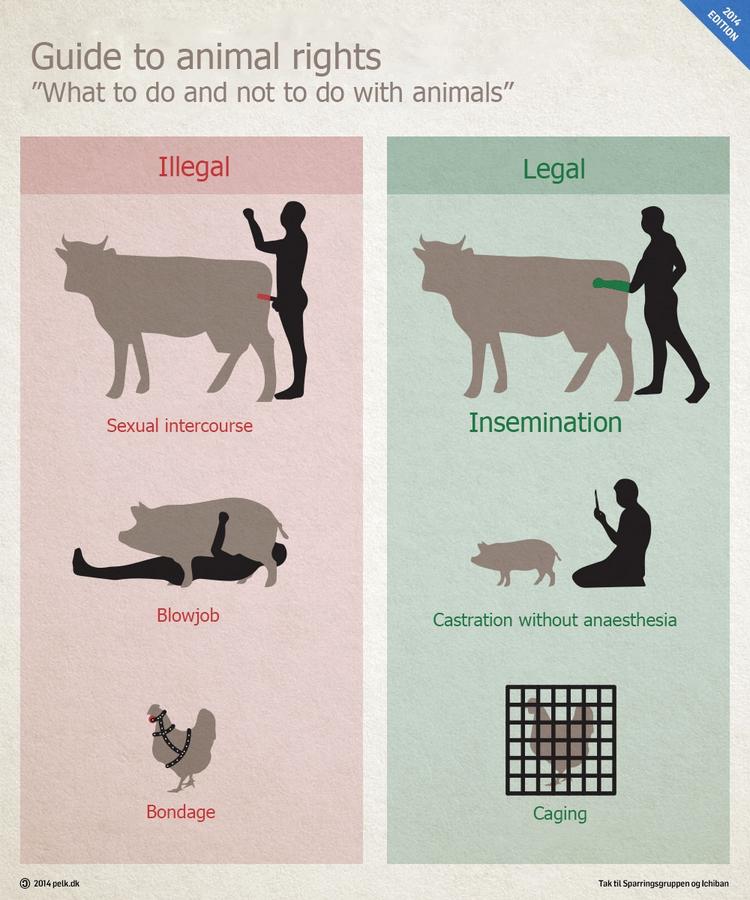 Oh I love this.
First off, caging chicken in tiny boxes has finally been illegalized a couple of years ago in Europe. That's just animal mistreatment and I don't think there's much room for debate there.

But the "a dick is much smaller than a whole arm" shit is especially spicy because it's missing the point incredibly hard.
Look, it's not about what you put into a cow. We kill cows regularly and raise some specifically for that purpose so it's not even about doing stuff to cows that a human would consider being terrible if done to them.
The cow isn't the subject, the cowfucker is. You're fucked in the head. Truly and well fucked in the head. Very likely potentially dangerous to society. Thus, any sane society would execute you for fucking a cow. Not because of the cow but because you're a fucking lunatic and we've got well too many people and no place to spare for some maniac that would fuck cows. Tha's really all there's to it.
SpoilerShow

Nobody who eats meat LIKES the treatment of animals in the big butcher factories we have here in burgerland. A lot of people don't think about it because there's nothing they can do. Put a bill before me to end that cruelty and I'll vote on it. But me eating or not eating meat won't make a difference. Only faggots think 1 extra vote/voice makes all the difference. It doesn't. You don't matter and I don't matter in the grand scheme. Only money matters.

People who kill animals in slaughterhouses are preparing meat for thousands of people to eat. Which, in some small way, contributes to keep all of those people alive.

People who fuck dogs are not contributing to anything except their own, mentally-deranged pleasure. And they are often harming the dog. Animals are not so stupid they can't be physically or emotionally harmed by sexual abuse from humans.

I have to wonder at the motives of anyone who would argue that it should be legal to fuck animals. I can't imagine someone favoring that legal stance unless they themselves intended to benefit directly from it. I'm an animal lover and I know many other people who are and I have never, EVER heard this shitty argument made by animal lovers. Only by faggot furries who want to rape dogs. I'd love for YMS the cocaine addict dogfucker to go up to the guy from New York Bully Crew and tell him he thinks it should be legal to rape dogs.

Fun fact: when this video first came out, Adam posted a snarky comment on it. The comment was basically "it's really stupid of you to say I don't know anything about cinema." Considering he deleted the comment, I'm guessing a ton of people pointed out he's woefully ignorant when it comes to pre-1980 cinema.
Last edited by Cuckara on Thu May 09, 2019 12:06 am, edited 1 time in total.
"I'm a nasty cock slut" - Lewis Jeffrey Lovhaug

For those that missed out on last year's drama: What do you think he’ll die of first?

1) Heart attack from too much cocaine, red bull and hot pockets
Or
2) Being kicked through a barn by a horse he tried to creep up on for some sexual relief
Top

Oh, boy, another quickie! What movies is he going to nitpick the shit out of and dislike this time? I love it when an internet nobody movie person hates movies.

BloodKnightDollfie wrote: ↑
Fri Feb 07, 2020 6:59 am
I am 6 feet tall and tower above these manlets and Chinese women are throwing their pussy at me as I type these words just for citizenship.

Yeah he doesn't exactly look like the pitcher type.
SpoilerShow

Yeah he doesn't exactly look like the pitcher type.