All the jewtube whores will certainly never let it rest... sure, Booger, it's not like these outrage hoarders won't just go onto another juicy gaming related "drama" that unearths itself 24 hours later, they will keep talking about Gearbox's shitty practices until something isn't done about it. Sure. The moral lighthouses of gaming industry right there.

He is a perfect PR link for Gearbox - has no integrity, mindset of a cheap whore and just like Randy Bitchfork assumes that "morals" is a village somewhere in Spain.

Well, he has similar number of subs and is just as good of a gamer as Joe is...

I mean they're both faggots so he kind of is.
Top

Gearbox is the company owned by Randy " The Kid Diddler" Bitchfork, isn't it? I'm pretty sure his only worry is how to recover the costs from the disaster that was Battleborn.
Top

I'm kinda disappoint that this hero shooter didn't turn into an an hero shooter for the whole company.
Autism attracts more autism. Sooner or later, an internet nobody will attract the exact kind of fans - and detractors - he deserves.
-Yours Truly

Le Redditeur wrote: ↑
Fri May 03, 2019 10:42 pm
Gearbox is the company owned by Randy " The Kid Diddler" Bitchfork, isn't it? I'm pretty sure his only worry is how to recover the costs from the disaster that was Battleborn.

At this point, it's do or die for Gearbox. The last new IP they had was the colossal flop Battleborn. Since then, they've been playing it safe with old reprints of Borderlands. Borderlands 1 HD remake, Borderlands Handsome Collection, Borderlands 2 VR etc. And fucking Bulletstorm.

I can't think of anyone 2 months after the initial release of that game who gave a single flying fuck about it, LET ALONE the 2017 remake.

We Happy Few was another of their fantastic turd bombs. I assume they only produced it though. As a company, all they have left is Borderlands 3 and Risk of Rain 2. RoR 2 seems to be doing well, but every indie game seems promising when it's in early access and has a big name backing it. Far as I can tell, it's Borderlands 3 or they might as well close up shop and fire everyone. They either win big with BL3 and keep everyone employed for another five years (DLC and micropays), or they fall short and sell everything off.

I think BL3 looks pretty decent based on the gameplay I've seen, but I don't trust Bitchford as far as I can throw him and I know for a fucking fact that the game will be stuffed with on-disc DLC, preorder bonuses and micropays. They were doing that shit as early as BL2. People don't remember the golden keys in BL2 and TPS, but I do.

Oh and btw, if BL3 does do well, they need to get their asses on a fucking timetable to put out Borderlands 4, 5 and 6, because ain't nobody out there paying for Battleborn 2. All the time they spent fucking around on battleborn the first go-around was time they could have been making Borderlands 3 and getting richer. Look at the way Bungie fucked their shit right up by letting go of Halo. I hope they realize they are the Borderlands company now.

SpoilerShow
Fuck Boogie btw. He's not a borderlands youtuber and I can't think of a cunt whose opinion I would trust LESS when looking for opinions on the gameplay of a new borderlands game

BL3 is gonna suck. Can't do much when you don't have any more of Sega's money to pilfer.
Top

I remember the gold keys. I also remember that you could duplicate them really easily.
SpoilerShow 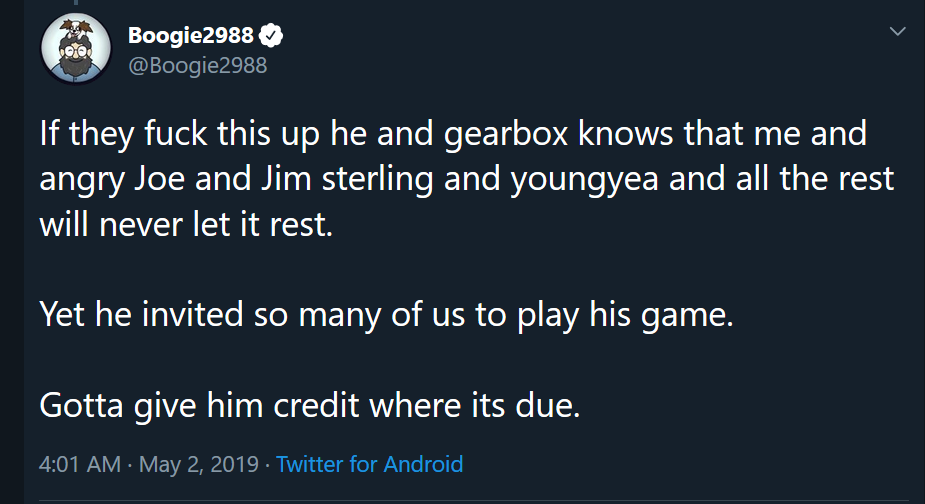 This whole "for the gaymers" thing has become the most annoying thing on YouTube in the last years. Can't walk 5 steps without running into one of these faggots. On the other hand I just love it when zoomers get taken for a ride.

With the "worth a buy" guy you could fill an entire 30 minute video compilation of his autism alone. I wonder why nobody has made a channel yet that proper reviews other channels, besides the obvious reasons that YouTube is dying, people would take you to court and the meme laws fucking you over.
Top

Guest wrote: ↑
Sat May 04, 2019 5:35 pm
I wonder why nobody has made a channel yet that proper reviews other channels, besides the obvious reasons that YouTube is dying, people would take you to court and the meme laws fucking you over.

I've noticed one or two over the years, but they never got much views. I guess no one's really done it properly yet.

Making fun of other YouTubers and being entertaining at the same time requires a level of spergery that YouTube won't allow, leading detractors to sink into psuedo-anonymous text mediums to keep the heat off, while also 99% of the time not accomplishing anything.
Top
Post Reply
4651 posts