VoiceOfReasonPast wrote: ↑
Sat Oct 10, 2020 8:39 pm
Dude has become so boring. Won't even start pointless drama if given the perfect opportunity.

Twitch has completely ruined his entertainment value. Now he can just do the "chill stream" bullshit and have retards throw money at him just to wear a vest. He used to at least have to try, now people are paying him just to sit on his ass and do nothing.

I've been following him long enough to know that this is probably going to be his lot in life forever. There'll be random dramas that pop up and people will say that it will finally end him, but he'll keep plugging away. He's going to be 60 years old playing Assassins Creed #127 doing tax fundraisers because he spent all of his money on fast food and junk.
Top

He never had any intention to stop streaming and get a real job. He will beg until he is in a nursing home. The way he's living now is how he will live his life until he dies. I wonder if he will even go to his parents' funeral when they pass? Maybe if they leave him some money.

People say they're jealous of dsp and I don't understand it at all. I guess they're thinking about how they would improve their lives with $150k per year? Well, the thing is, DSP isn't you or me. He doesn't do anything with money to improve his life. Don't think about yourself with 150k per year. Think about if you had to literally become a pigroach to get 150k annually. What joy does dsp have in his life? He plays games he hates, hangs out with a dumb bitch listening to african tribal music, neglects his overly-excitable cat (which has too much energy because he doesn't tire it out daily,) and bitches about his life to anyone who will listen. He spends one day a week conSOOMing american fast food and mall walking/buying random shit with his horse waifu. He watches movies while playing WWE Champions and spending thousands on it. He has like 2000 blurays. That's his social life.

I'm a weird hermit and even I find his life barren and empty. DSP talks to about 3 people in his entire life: His horse wife and his mom and dad. My best guess is he subjects both mom and dad to endless prestream rants about how much he hates the trolls and how his life is awful.

Despite making 150k per year, he never sends any of it to his parents, family or friends. He never looked at his bank account after a particularly profitable begging streak and thought to himself, "I should send John and Howard a few thousand each and apologize to them for letting money come between us." What's a few thousand to DSP anyway? A few sweaty man jpgs?

His streams now are impossible to find even ironic enjoyment from. I've almost entirely stopped following him. He's so boring and he stops gameplay constantly to beg or talk about money. Every 3 minutes or so, he's talking about money, diving into chat looking for money or pausing gameplay for money. This dude is obsessive. I still don't understand why he even CARES about money. He gets more than enough for his needs. He has to be a fucking gambling addict. No matter how much he makes, he still tells fans they need to donate everything if they want to see him play stuff. Donate and paymetons and then double and triple dip when he plays the game finally.

Then he sits there in sausage pose with lifeless doll's eyes and acts like he's being waterboarded when he has to actually play a game.

And people say they're JEALOUS? Of this? 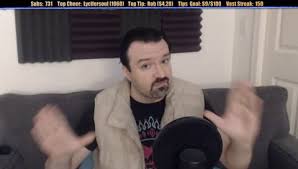 I can understand being jealous of being able to play video games 6 hours a day - not all that well, and with no commentary of note - and make six figures a year doing it. What I can't understand is being jealous of DSP specifically, with all the baggage he has. I wouldn't swap places with DSP, even though myself and my wife combined earn less than him. This fat cracker is clearly miserable, has no friends, his wife is literally retarded and acts like an ISIS hostage, he's unhealthy and balding, and deep down he knows he's a CWC-tier internet joke. Money is literally all he has.
Top

I think the jealousy stems from him making an absurd amount of money while doing the absolute minimum. The way he takes it all for granted and pisses his money away is also sort of infuriating if you think about it. If you spend any amount of time watching DSP you'll end up having a serious dislike of him. He's basically the personification of greed and sloth, so of course people want him to get some comeuppance.

It's never going to happen though, so you just have to take solace in the fact that he's living in a purgatory of his own making.
Top

In a way, he's like a Spoony from a slightly alternate universe.
Autism attracts more autism. Sooner or later, an internet nobody will attract the exact kind of fans - and detractors - he deserves.
-Yours Truly

These people need to watch the 1% of streamers who get 10x more a hour doing less work and there heads would explode. If anything all dsp shows is twitch is full of paypigs needing to be exploited because I see smaller channels than his still make good money in bits and subs

I have two questions for people that have followed this colossal loser:

How did he come up with the name Darksydephil, and why does he wear that stupid cowboy hat when he grew up in the mean streets of Connecticut?
Top

I think that was like his "persona" when he still went on FGC events.. like the one where he scored his LEGENDARY 4th place..
Whenever he goes on long rants about this stuff, it comes out completely incomprehensible. Just tip him a tenner and he'll start running his mouth.
It's a trap!
Top

Newhalf wrote: ↑
Sun Oct 18, 2020 8:48 am
I think that was like his "persona" when he still went on FGC events.. like the one where he scored his LEGENDARY 4th place..
Whenever he goes on long rants about this stuff, it comes out completely incomprehensible. Just tip him a tenner and he'll start running his mouth.

But why did he do the whole "Darksyde" thing?
Top

I don't think that's known or rather that there is anything more to it than being an edgy name he thought of as a teenager.
SpoilerShow