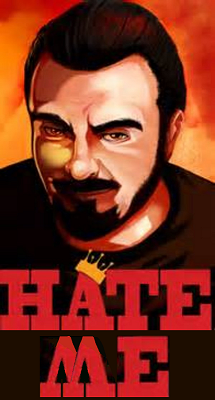 I finally caught some "highlights" of him playing Soulsborne and Sekiro. It's just the same shit over and over.

"DUDE I PRESSED ROLL, NOTHING HAPPENED!"

When he dies, it always the game screwing him or a dodgy controller. Is that his schtick or is he really that autistic?

Either way, how do people stomach this garbage?
Top

He really is that autistic. Fun fact: If you save a replay of an online game you can have the game show you the inputs when you watch it, even those of your opponent. Phil fucks up inputs to an astonishing degree. He's too stupid to realize it.
SpoilerShow

He might also be too proud to admit it. Kinda like an old man refusing to accept that his eyesight has gone to shit.

I guess he provides a certain audience with the type of monotone entertainment that they crave. A bit like fans of harem animu.
Autism attracts more autism. Sooner or later, an internet nobody will attract the exact kind of fans - and detractors - he deserves.
-Yours Truly

Nearly 40 year old man that dresses up in a vest and cowboy hat for pennies from autistic children that took his wife to a pizza place on their honeymoon.

What a winner.
Top

mad bum wrote: ↑
Wed May 06, 2020 8:04 pm
I've never had a credit card in my life, and this faggot gets his credit card debt ERASED?! So you're telling me I could fix up my home for 100k and just file for bankruptcy with no repercussions?

This really tells me all I needed to know about America and where this is going. Someone has to pay the billth and from the looks of it it's going to be you Reddit Cat

I knew he wasn’t going to get fucked. He brings in a lot of money and spends it quickly, he’s the bank’s paypig.
Top

To be honest I think pigroach bribed the court lady or something like that. Maybe there is even a money laundering scheme going on. The fraud is clearly on display for everyone to see.

That's not even a real sentence structure, what is he trying to say? Maybe stop hitting the gin bottle so much Phil

That second sentence is a bit on the long side, isn't it?
Autism attracts more autism. Sooner or later, an internet nobody will attract the exact kind of fans - and detractors - he deserves.
-Yours Truly

It seems that in this past week that some retard has been copyright striking mirrors of Phil's streams without his permission. Phil even had to tell that sperg to knock it off and they seem butthurt thinking he is doing Phil a favor.
Top
Post Reply
7814 posts